“There can be as much value in the blink of an eye as in months of rational analysis.”
-Malcolm Gladwell

One of the trends I’ve noticed in games I’ve played a lot of is that there tends to be a concept of “beauty” that is reflected in the way the players think and talk about the games they play. What do they mean when they say a particular position or aspect of a position is “beautiful”? I’m not completely sure, even though I use this kind of language a lot as well. I have some ideas, though. (That’s why I’m writing a blog post about it)

In games, it’s common to draw a distinction between “tactics” and “strategy.” “Tactics” refers to calculated sequences of specific moves, whereas “strategy” refers to larger patterns within the game. In essence “strategy” is a approximation for “tactics” over the long-term; it is useful when calculating enough moves in advance to make a decision becomes intractable.

In many games, when I am in a situation where calculation is too difficult, I find that I instinctively try to make my position as “beautiful” as possible. I therefore associate beauty more with strategy than with tactics, since it’s a thing I use when I don’t want to think tactically. That said, this isn’t cut-and-dried by any means; I have seen plenty of tactical sequences referred to as “beautiful.”

So what is beauty, then? All I’ve said so far is that I seek it out when I’m too lazy to calculate. Well, here’s an example: 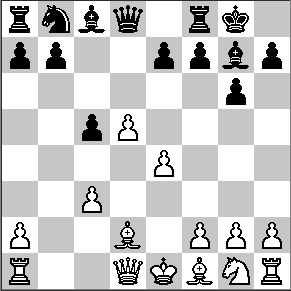 Several times in chess clubs I’ve heard people refer to specific chess pieces as “sexy.” If you want to see an example of a sexy piece, the black bishop in the upper right is a prime example. Look at that monster! Not only is it putting pressure on the pawn on c3, it’s preventing the pawn from moving, since if White pushed the pawn he would put in his rook in danger. In order to fully deal with the threat, White would need to move his rook and then push his pawn, which would take two moves, and even then the bishop would remain very powerful.

It’s difficult to say exactly what makes a piece like that bishop look quite so good to a chess-player. Of course, the bishop’s developed, and it’s attacking a pawn, but it’s more than that; there’s something peculiarly beautiful about the bishop that makes applying the descriptor “sexy” to it seem not wholly inappropriate.

Chess masters almost universally accept that there is “beauty” in chess positions or aspects of it, but they have incredible amounts of trouble teaching this concept to the computer programs they write to play the game. Typical position evaluation algorithms depend on a move search many moves deep (about 10 or 20 depending on the position) and then a crude evaluation at the end. (That’s tactics, followed by strategy. Check it out) The crude evaluation at the end tends to assign a value to each piece, such as 1/pawn, 3.5/bishop and knight, 5/rook, 9/queen, and then an extra quarter-point per square of mobility available to the pieces. In the position I described, the crude evaluation would assign to Black’s dark-squared bishop a value inferior to her light-squared bishop, since it only defends 6 squares, whereas the other defends 7! And yet it’s clear that the dark-squared bishop is not only the better bishop, but the MVP of Black’s position.

Of course, this wouldn’t cause too many problems for the computer, since it can just look so far ahead that it will see the tactical benefits to Black’s sexy bishop. But it still feels like the computer has nonetheless missed the “point,” somehow.

This gets brought home harder in games where there are more moves available, so looking far ahead is harder, and patterns of “beauty” are harder to predict algorithmically. In the game of Go, for example, there are hundreds of moves available to each player at each move, and there is no approximation for beauty like “mobility” that gives the computer some idea of what pieces (or stones, in go) are really contributing. This makes computers much worse at go than at chess. Take this problem: 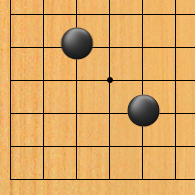 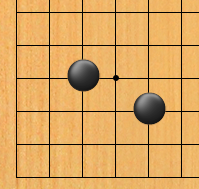 One of these corner formations is strong and efficient, and of them is weak. Which is which? If you only know the rules of go, or if you know the rules and have played a few times but not enough to have learned which one is better (or to have been told), this problem is impossibly hard. The frustrating thing about being a beginner in these kinds of games is that you haven’t yet come to learn what makes a thing beautiful or not; experienced players will know at a glance that you have made a bad move when it would have taken you minutes (or sometimes, years) of calculation to tactically verify that your move was poor.

We can even see concepts like these in games like Starcraft, where it is often necessary to instantly know which of two armies is going to win a battle. Believe it or don’t, but I have heard people refer to Starcraft units, games, and positions as “beautiful,” and I definitely think in those terms a fair amount when I play the game. 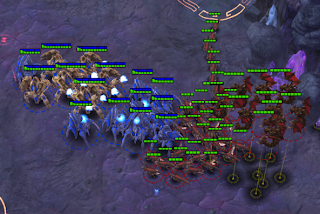 Which army has the advantage? A Starcraft beginner will have difficulty guessing, but somebody who has played many games will know at a glance because she will have seen scenarios similar to this one many times before.

Beauty in games is a way for experienced players to describe their intuition about a position. It comes up whenever experience allows players to make snap judgments. But at the same time, it seems to me like it’s more than that, more than a strategic shortcut. Game beauty seems to me to deserve equal respect to “real” beauty, the kind we appreciate when we listen to a good song or admire a piece of art. It’s sad, though, that unlike in music, where beauty can be appreciated by everyone, appreciation of beauty in games is restricted to those who play. (Excessively?) 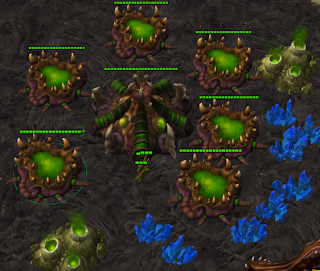 Don’t be fooled by the chess. This entire blog post was really just a long-winded, poorly-reasoned explanation for why playing a lot of Starcraft makes me an artist.

An experienced Starcraft player will recognize this as the widely feared “Six Pool” strategy.

For those who are curious, in the go example, the formation on the left is the strong one; a connection between two stones of two diagonal squares is weak. In the Starcraft example, the Zerg player (Red) has the advantage; zerglings are strong against stalkers and immortals, and there aren't enough stalkers to deal with the threat of the mutalisks.

Email ThisBlogThis!Share to TwitterShare to FacebookShare to Pinterest
Labels: games