This post is partially a continuation of my previous posts on utilitarianism, and partially on philosophy in general; mostly, it's my two cents on one of the odder parts of consequentialist debate: decision theories.

So, you ask, why don't you take both boxes, getting the free $1,000?  Well, says P, there's a catch: "I have predicted whether you will take one box or two boxes."  (Or maybe I've simulated all of the atoms in the universe, or maybe studied your psychology, or maybe something else--versions of the paradox differ in how P knows how many boxes you're going to take.  But however he knows it, you believe him; maybe he has, in the past, predicted everyone who's taken this challenge successfully.)  "So I know what you're going to do", says P, "and before you arrived I decided how much money to put in box A.  If I predicted that you were going to take only box A, I put $1,000,000 in it.  Otherwise--if I predicted that you were going to take both boxes--I left box A empty." 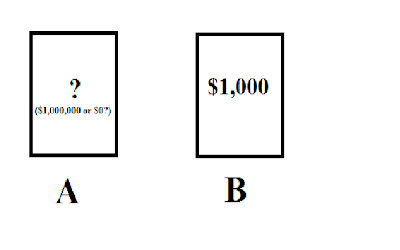 So, who's right?  Well, the one-box-taking evidential decision theorist will take only box A, and--per the assumptions of the problem--find $1,000,000 in it.  The two-box-taking causal decision theorist, on the other hand, will take both box A and box B, confident that their actions can't change what's in box A--and then will find box A to be empty, and end up with $1,000.

Well, let's back up a second.  Why was there $1,000,000 in box A when the ED opened the box, but not when the CD did?  What exactly do we mean when we say that P knows how many boxes you will pick?

One of two things is true.  Either we live in a universe where, prior to you making your choice, P knows how many boxes you'll take, or we don't.

Say P doesn't know with certainty.  He's pretty sure--he's studied you a lot and studied psychology a lot and is pretty damn sure he knows how many boxes you'll take--but theoretically he could be wrong.  Well, in this case the two-box-taking CD's mistake was in how he lived his life up until that point.  He made lots of decisions that made P think he would take two boxes, and so P didn't put anything in box A for him.  If he really wanted that $1,000,000 he should have written lots of blog posts during his life about how he would take only one box so that when the day came he could convince P to put the $1,000,000 in box A--and then taken both boxes, to get the full $1,001,000.  But he didn't, and now that he's sitting there with both boxes in front of him he might as well take both of them--P has already decided that there isn't going to be any money in the first box.

But what if P knows for sure?  What if your blog posts can't fool him?  What if he's simulated every atom in the universe and knows whether you'll take one box or two?  Then shouldn't you choose to be an evidential decision theorist, and choose to take only box A, so that you can get the $1,000,000?

In fact, causal decision theory is the same thing as evidential decision theory in non-contradictory universes.  There is no distinction between actions that happen if and only if you make some decision with actions caused by that decision except in inconsistent universes where something can be dependent on a decision but somehow not causally related to it.

So what would happen if P offered this deal to me?  Well, I'd talk a lot about how much I only intend to take one box, but P wouldn't buy it; he'd leave box A empty, and I'd take both boxes for a total of $1,000.

Though writing this blog post certainly won't help.
Posted by Unknown at 12:30 AM

Email ThisBlogThis!Share to TwitterShare to FacebookShare to Pinterest
Labels: utilitarianism